The History of Moyvalley Golf Club and Balyna Estate.

Moyvalley Golf Club was founded in 2007 and then affiliated to the Golfing Union of Ireland in 2008.

With this great news to the small membership, they celebrated with the planting of a tree on the 10th holes. Followed by the first Captain Mr. Robert Emmet teeing off at the 10th to signal the start of the golfing season at Moyvalley.

The tradition of teeing off at the 10th has continued, with both Lady Captain and Mr Captain being intimidated into showing their nerve and prowess in hitting the fairway.

The tree still stands to the side of the 10th and as it grows so does the membership of Moyvalley.

In 2010 the “Financial Crisis” landed at the door step of Moyvalley Golf Club with the receivership of both the Hotel and Golf Course. Negotiations between the committee with the receiver permitted access to both the course and clubhouse continued until December 2013. At this time both the course and the clubhouse were closed to facilitate the sale process on a vacant possession basis.

With the kindness of neighbouring club Rathcore GC and permission from the Golfing Union of Ireland, Moyvalley Golf Club continued its affiliation whilst being hosted at Rathcore GC, Co.Meath.

In 2014 the Hotel and Golf Resort was sold to its current owners, and the Club returned to its home in May 2014.

Since then, with the club on a greater and more secure footing , and with a commitment from the new owners to invest and improve the course and the facilities Moyvalley Golf Club have gone from strength to strength and look forward to enjoying the next decade and more.

Darren worked closely with European Golf Design to produce this top quality golf course at Moyvalley, and as such the resort has played host to the 2009 Challenge of Ireland Tournament which is an event on the European Challenge Tour, 2016 & 2017 Irish PGA Championship and 2019 Dubai Duty Free Irish Open qualifier.

Large putting surfaces, numerous water hazards and strategically positioned sand-traps are the primary features of this par 72 course which requires a studied, accurate approach rather than a mindless grip and rip it style of play.

“I’m especially delighted with the greens,” Clarke commented on his first expedition into golf course design,” which are among the best putting surfaces in the country. We created gentle slopes which will make players think about where to place their approach shots, especially when the greens are fast or in windy conditions.”

When the course came under new ownership in 2014, and after a period of reflection and evaluation, the owners decided to start the process of reinvigorating Moyvalley. With this they appointed Christy O’Connor Junior to undertake the upgrade and redevelopment of the golf course.

Sadly, in January 2016, Christy passed away suddenly, but in conjunction with the owners, the O’Connor Family and European Golf Design (The original designer’s in association with Darren Clarke) the redevelopment continued.

In 2016 all the bunkers were rebuilt, along with deep scarification on the greens and intensive fairway sanding were completed. With these works and investment in machinery approx. €1m euro has been spent so far.

We look forward to the continuing upgrade of the course, which may not be visual but the foundations need to be in great condition to build upon.

In 2016 the course was renamed Twin Oaks Championship Course and Twin Oak trees were planted. As they grow, so hopefully will the membership, and the courses reputation as a course that should be on every golfer’s wish list.

In 2020 the course reverted to the original name of Moyvalley Golf Course.

Obviously as the course was only opened 10 years ago you shouldn’t be expecting a course steeped in tradition, however if you’re searching for a truly challenging and strategic test of golf on a track with excellently kept playing surfaces, then you needn’t look any further.

The course, clubhouse and hotel all lie in the grounds of the Balyna Estate, the backdrop to the course being Balyna House a magnificent 19th century Italianate mansion. This was not the first house on the estate as it replaced the original house which was badly burned in a fire in 1878.

The estate was granted to Charles O’More in 1567 by Queen Elizabeth. How this came about is quite a story.

Caech MacDonnell O More was Chief of Leix from 1542 to 1545. In 1555 his brother, Patrick O More, supported by the O ‘Connors of Offaly (the neighbouring county) invaded Leix. His brother Rory Óg, who opposed him, was killed. In England this invasion was regarded as Rory Óg's rebellion and, as a result, his land was forfeited and colonised by the English, and its name was changed from Leix to Queen's County. In 1567, twelve years too late, it was established that it was Patrick and his allies who had been the "rebels", while Rory Óg had been the defender. In the meantime the O ‘More territory had been parcelled out among English adventurers and it was deemed politically inadvisable to uproot them, hence the granting of the estate to Charles.

Balyna became the home of the O’ More chieftains and their descendants for the next 400 years. In October 1641 Rory O ‘More (1592 -1655), a nephew of Rory Óg, plotted with Conor Maguire, Baron of Enniskillen, and others to seize Dublin Castle. They were betrayed by Owen O ‘Connelly. Rory, who had been suspicious of the traitor, escaped, but the others were executed. Rory hid in the thick woods then surrounding Balyna. When surprised by his pursuers he is said to have plunged his stick into the ground before fleeing. This stick took root and grew into a conifer. There was a family legend that when the tree died the family would leave Balyna. In 1957 the tree died and, shortly afterwards, Balyna passed from the More O’ Ferrall family.

The Golf Club have two trophies named after the O’Mores and Balyna, both being a major event in the club calendar.

Moyvalley Golf Course at Moyvalley Hotel & Golf Resort is an inland design based on the principles of Links golf. 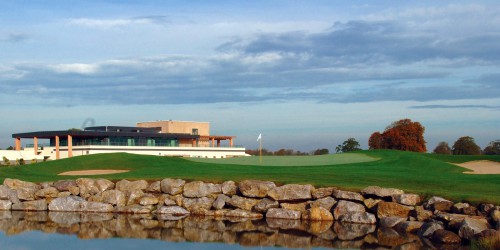 Moyvalley Golf Club is currently open to new members. We offer a range of membership categories and packages to suit you and your family.

A link to the Moyvalley Hotel & Golf Resort website.